What a difference a day makes

It's taken me a while to recover from Saturday's graduation ceremony... won't bore you with all the details, just the highlights...

First of all, the event itself was great - super-organised, fun and moving (although there wasn't as much sobbing as I'd anticipated). W had been counting down the days and could barely contain his excitement as went got ready to leave. Hard to believe when you see this photo of us ready for the off: 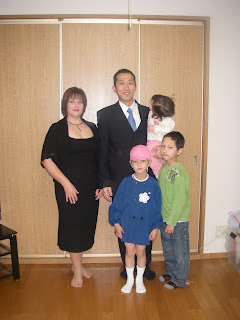 Not a great photo - I was somewhat nervous about leaving M for the first time, but didn't have much choice as I had been told categorically that neither she nor her biggest brother could attend (as this was such a serious occasion), plus we had be fed and dressed in all our finery by 7.15am, so it was not exactly a stress-free zone. Fortunately, Baachan was able to drop everything to help us out, and J was on hand to act as interpreter in our absence (ie, that scream means...), and actually they all got on fine. Hurrah! Perhaps she'll babysit again some time! In case you're wondering, yes, W's uniform includes a pink hat (it took a whole week at kindy for him to agree to wear it!) and yes, he is wearing something under his tunic (very short shorts). I thought we looked fine, it wasn't until we were at the kindergarten, seated and waiting for the ceremony to begin that perhaps my outfit was inappropriate... I'd got the colour right (every single women there was dress head to toe in black), however the problem was that they were all dressed literally head to toe, as in up-to-the-neck! And this was confirmed as the woman seated next to me took one look and told me to cover myself up, please! I was mortified and spent the 4 hours that followed (a typically long and drawn out affair) trying my gaijin best to be inconspicuous.

Anyway, I was feeling pretty embarrassed about looking like a tart, and very low having realised that the mums from the kindergarten were doing their best to ostracise me (I thought I'd been imagining things over the last few months, but even K could see it on Saturday) that I've been having a bit of an 'Oh woe is me, I hate Japan pity party'.But today things took a turn for the better, and it looks as though I have a new friend, too! W was desperate for his buddy to come to play, so his mum brought him round this morning - and they stayed until it was time to fetch J from school at 3pm! Hahaha, we spent the time chatting and eating cream cakes (no chocolate). It turns out that she and I have a lot in common, including finding it difficult to get to know other Japanese women as friends. She herself is Japanese, but she is deaf and so feels alienated in much the same was as I do, in that other people tend to avoid trying to communicate with her and that she is rarely made to feel part of things. I feel really blessed to have spent today talking with her, and we will definitely be getting together for more cake very soon. :) Suddenly the sun is shining again!

Before I sign off, I've decided to join in with all the 'pay it forward' posts I've noticed over the last few days - don't know if I'll have any takers as it looks as though a lot of you out there are already doing it, but hey the offer is there:

Do you run to your post box several times a day hoping to find a little something? Do you find the wait 'til Christmas way too long? Then leave me a comment below and the first 3 will receive a package of goodies from me (eventually). Perhaps some Sanuki udon or some locally produce olive oil... I'll get my thinking hat on. And if you're fed up to the back teeth with Japanese stuff then I'll get creative with some baking treats. There is a catch, though. You have to be willing do the same (ie. pass on surprises to 3 others)! Don't forget, I need to know who you are in order to send you anything, so make sure to include some kind of contact detail if I don't already know you!
Posted by anchan at 19:47