We've had a busy weekend. Actually, the boys have been busy and K and I have done a lot of watching! After 3 hours of football practice in the afternoon, Saturday evening was karate grading for J, his first since arriving in Japan. W was asked to come along as they needed an extra body for sparring. J did well (although he didn't win in his sparring match, ego was severely bruised!), and he'll find out if he passed next week. W knocked his sparring partner to the floor within seconds of the round starting - yikes! Neither of them had done contact sparring before (apart from fighting each other!), and I'm pretty sure that it's not something I want them to pursue... but with all this armour on they are unlikely to get hurt: 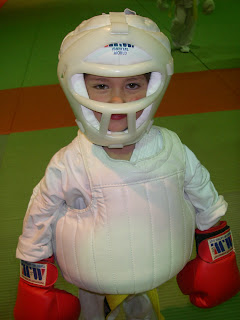 The weather has been glorious, so as soon as this morning's service was over the 3 boys off to the beach (K wanted to go digging for razor fish).Apparently, as the tide is going out you sprinkle salt on the surface and out they pop. But apparel is very important, as evidenced by the buckets: 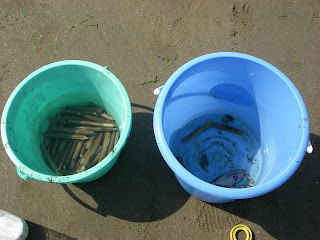 The bucket on the left-hand side is Baachan's, she a seasoned pro: 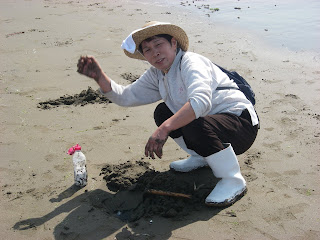 The bucket on the right is K, J and W's: 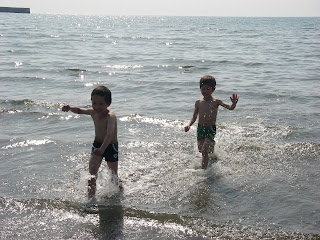 Well, the sun was shining, the sea was... there, and the boys are half British after all! K is, of course, expecting to find razor fish in his miso soup tomorrow morning. Um, only if he makes it himself...
Posted by anchan at 20:17