Not in the eco sense by, by any stretch of the imagination. For some reason I just particularly like green at the moment. So, what do you reckon this is then? A clue... this is Japan... 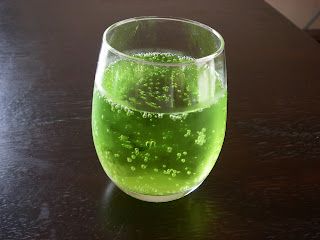 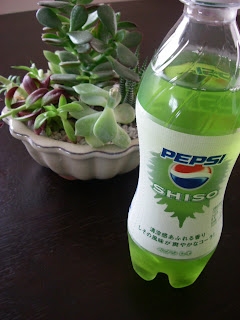 Pepsi! The Japanese certainly love to surprise us with new flavours each season, last year it was cucumber (wasn't here to try that one) which I imagine would be very refreshing. This years it is shiso. None the wiser? Shiso is a leaf (perilla, same family as mint/basil apparently) often used in cooking here, shredded as a dressing or chopped and mixed with ume. It has a very distinct smell and flavour. Never would have thought it could end up as a Pepsi flavour... and despite it's rather radio-active looking flourescent colour, it is unexpectedly, rather delicious!

Speaking of cucumbers, we were given a whole bag of them by a farming neighbour the other day. Now, I don't exactly hate cucumber, but let's just say that there are plenty of other vegetables I would rather eat (except okra, I really do dislike okra), however I do have a penchant for pickles and read a recipe on Not Quite Nigella's website a couple of weeks ago that I was quite keen to try: 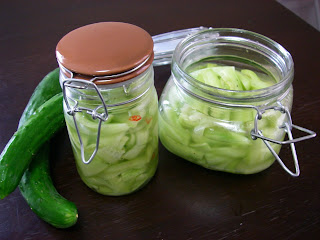 Ooooh, these are goooood... I have enough cucumbers sitting in the fridge to make another batch, these won't hang around for long, especially as I open the jar pretty much every time I open the fridge. Thanks NQN's mum for sharing the recipe with your fab daughter! And if you are wondering, they are an absolute doddle to make. Here's a link to the recipe:

I have no idea what a Lebanese cucumber is, but this worked perfectly well with the smaller-than-home fruit we get here!

Finally, here's a little something to make you smile. M LOVES noodles! It's just as well, given that we live in the heart of Udon Land. And she's definitely mastering the Japanese art of slurping. Keep an eye on that noodle, it disappears fast: