The August 2009 Daring Bakers' challenge was hosted by Angela of A Spoonful of Sugar and Lorraine of Not Quite Nigella. They chose the spectacular Dobos Torte based on a recipe from Rick Rodger's cookbook Kaffeehaus: Exquisite desserts from the Classic Caffes of Vienna, Budapest, and Prague. 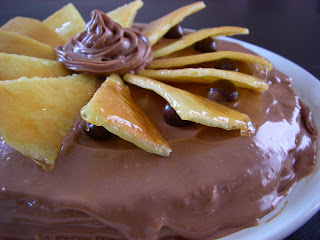 Phew, I did it! I admit I was a little scared when this challenge was first announced, but after reading through the recipe a few times I decided that it was perfectly doable and so not to chicken out. The result is just lovely. Well, mine doesn't look a patch as good as a lot of the other entries I've seen (take a look here: http://www.thedaringkitchen.com/), but it tastes absolutely divine. I just wish that that I'd timed making this with a special occasion, but hey, it's Friday and that's good enough! I'd promised something special for dessert tonight, but now I have to confess that the boys persuaded me to cut into it after lunch... hope there's still a piece left by the time K gets home. 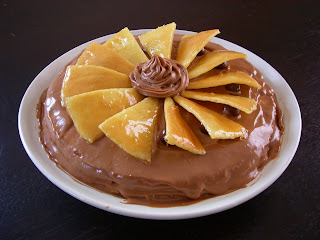 I'm having a little trouble with blogger at the moment, it's not allowing me to paste the recipe for you but you can find it in The Daring Kitchen (it's eight pages long, so I hope you don't mind that I won't re-type it here!). As I was making this for the family, I went nut-free. 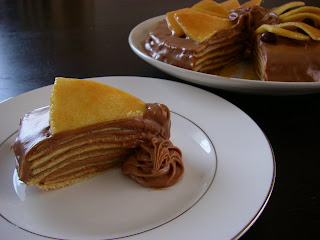 It's the butter cream that does it for me. I'd never made this type of butter cream before, but I think that it is the same type of butter cream that my mum used to use for her Gateau Diane, a creation that I would request of her every time my birthday came around!
Yeah, this was quite a challenge for me. As I said yesterday, my batter went a little flat from being left to stand. As a result, the layers were crepe thin and a little difficult to work with, and the final cake wasn't as deep as it should be (in spite of having 8 layers). I didn't encounter any problems with the top layer, which was the part I was most worried about - hurrah! A big thank you to our hosts this month for choosing such a fabulous cake for us all to make, and for the great lengths they went to to ensure that we would be able to pull it off! xxx
Posted by anchan at 11:19