Yesterday was Hina Matsuri (girls' festival, hina is a small doll). Strangely, it's not a national holiday (as the boys' festival is), but there are special traditions to mark the event. Namely dolls. Not your average Barbie, but fancy ornamental dolls that cost an absolute fortune and are displayed for a few weeks leading up to the festival. W's kindergarten marked the day by organising a mochizuki taikai (a special event pounding rice to make bean-filled chewy cakes) for grandparents. I knew that they had the most amazing display set up on the stage, so I sneaked in to get a good photo... but they'd packed it away! You'd think they'd leave it up at least for the day of the festival, especially as they had visitors. But W told me that they had to pack it up so that they can practise for the graduation ceremony (stand up straight, hold the certificate with arms out just so, bow at this angle... don't get me started), so I've borrowed a picture for here: 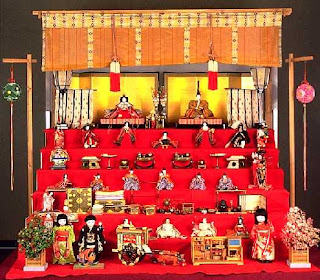 Baa-chan came for the day, I think she was feeling pretty chuffed to have been invited. I made chirashizushi for dinner (a traditional dish for this festival, basically rice prepared as for sushi but with veggies (lotus root, carrot, shiitake and bamboo) stirred in and various toppings (finely shredded sweet egg, shiso leaves and crab) sprinkled over the top), amongst other things. Was slightly nervous as this was the first time I have cooked a proper Japanese meal for MIL. K didn't think I'd get it right but later gave the thumbs up: 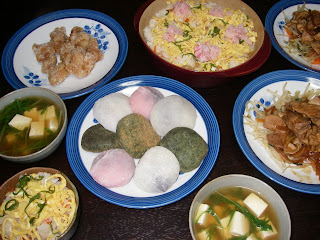 W was very proud of his mochi (the plate of pink, green and white balls in the middle) and couldn't wait for us to eat them. In order to get first pick, he wolfed his way through the sushi, karaage (chunks of marinaded and fried chicken), japanese-style potato salad and a bowl of sumashijiru (soup with tofu) - yes, this is the same W who would only eat rice six months ago!
Posted by anchan at 20:27