Took the scenic route (i.e. got a bit lost) to kindergarten the other day, drove through lots of fields and downs some extremely narrow (and barely used, by the looks of them) roads, and stumbled across a very bizarre vegetable plot: 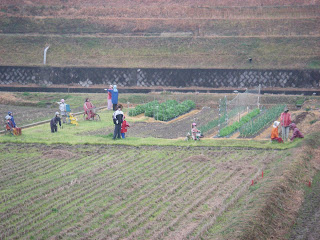 Pretty neat and tidy, eh? Looks pretty lively... except it's not. Look closer, those people have no faces: 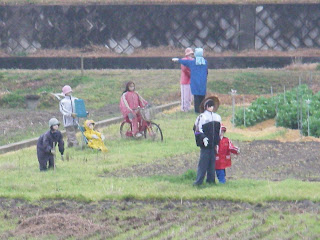 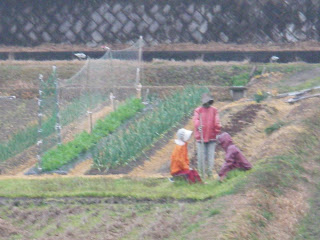 Scarecrows! Me thinks the farmer has too much time on his hands. In fact, this farmer hit the news a few years back with his scarecrows. His fields were being wrecked by wild boar, so he made loads of real -looking scarecrows in a bid to keep them away. K's colleague was having a similar problem on his land and laid traps - the next day he had caught 12 wild boars! If only he had a butcher friend...

The other day I held a baby shower for a Japanese friend. Very small scale, only a few of us, and it's not a British custom so wasn't really sure what a baby shower should entail. Played a couple of games, one of which was quite gross but very funny - I melted various chocolates (and no, I didn't eat any)and squished them one-by-one in nappies, then the guests had to try and guess what kind of chocolate they were. Highlight for me was watching my very, very cute friend Hiroko sniffing and then tasting! We ate lots of goodies and treats, including a baked camembert which was very simple to put together: 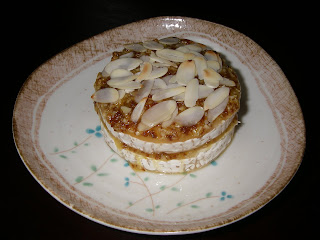 1 camembert (I used a small one, 125g, if you use a bigger one you may need to double he recipe)
25g brown sugar
1/2 tablespoon Dijon mustard
20g flaked almonds

Chop half the almonds and combine with the sugar and mustard. Cut the camembert in half horizontally and put one half cut side up on a baking tray. Spread with half the mixture, then put the other half of the cheese on top (again, cut side up) and top with the remaining mixture. Sprinkle with the rest of the almonds, then bake at 190c for about 12 minutes. Serve with slices of apple, chunks of French bread, etc. to dip in.

I love camembert, but wasn't so keen on the mustard in this recipe. Would make again, but with a different filling (chilli and apricot, mmmmm)>

I also made another nappy cake for the guest of honour to take home: 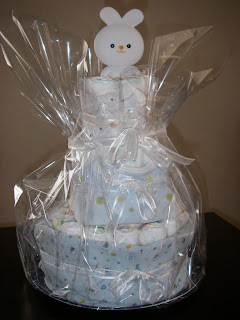