After years of saving our Christmas money, we have finally taken the plunge and bought our piano! 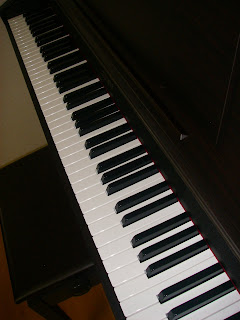 Actually, it's an electric piano, which means that that the volume can be turned down and we will all be able to practise whilst wearing headphones, which is a very, very good thing. And we won't get kicked out of our house (there is a clause in our lease that says we are not allowed a piano as it would disturb the neighbours! Never mind that the neighbours have a big dog that barks 24/7. Grrrrr.) Of course, none of us can play as yet. I've ordered a book to see if I can teach myself, until we can afford to take some lessons. The idea is that one of the children (M?) will have lessons and I will sit in and eavesdrop... Until then, at least we have the demo option to listen to, hahaha. It was a real bargain, less than half of what we would have to have paid in the UK. And it's beautiful, if somewhat bigger than it looked in the shop!

On a more domesticated matter, I've been doing what housewives all across the country have been doing - making umeshu: 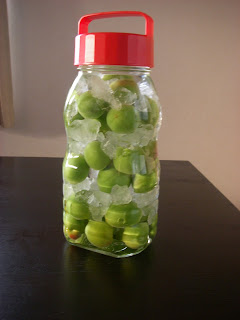 Basically, it's layers of green apricots and huge chunks of sugar drowned in white liquor, now to be left of a few months before it's ready to drink. I followed Blue Lotus' method, so if your curious please do check out her post as she's far more eloquent (and takes better pictures!) than me:

I also made Jo's zucchini-chocolate cake for K's dad yesterday, as we have an abundance of courgettes at the moment:

In fact I really want to make another for us (we didn't get a slice so don't know what it was like, although it looked/smelled fabulous), but that would involve going out into the garden and after this morning's encounter with 2(!) mukade, I'm just not brave enough yet... They really freak me out, but not only me. Read the following from Hanami Web Inside Japan:

They are often referred to in Japanese literature as a symbols of darkness and evil.

For example in Tanizaki's "Yume no hashi", bite of mukade kills the narrator's mother.

Their reputation is well deserved. These centipedes climb to walls, and sometimes drop on to victim. Although few accidents are reported, some of the mukade species contain so much poison that a bite to neck can kill adult human being. Also they have nasty tendency to crawl to human body cavities, such as nose or ear when subject is sleeping.

Mukade eats cockroaches and flies and spiders. They are predators with amazingly fast movement. They might lay still for long time, and when disturbed they move swiftly. When killing them one should be careful, because if you cut them in half, the biting end might attack you. It is necessary to hit the head.

Mukade lives in dark and moist places, such as in kitchen sink sewer. They are said to live up to seven years.

There are many interesting folklore and beliefs about the mukade in Japan. It is said for example that to kill them you must burn them, otherwise they might come back to life and revenge you. There is also story that during the Kanto earthquake, earth opened up and they broke free from the depths of hell and escaped on earth.'

And if you're brave enough, check out this link (I learned my lesson when I posted about the geji geji - I don't want to log on to see one of these beasts waiting to greet me, thank you very much):

At least they eat cockroaches...
Posted by anchan at 20:14