The 2009 October Daring Bakers’ challenge was brought to us by Ami S. She chose macarons from Claudia Fleming’s The Last Course: The Desserts of Gramercy Tavern as the challenge recipe.

It's days like today when I wonder if I was dreaming when I imagined I could bake. Maybe it's because I was already in rather a bad mood before even tying my apron strings. Let's just say, I've been knocked back a peg or two.

I had to gulp when I read of this month's challenge. The posh department stores have stunning arrays of French Macaroons, all perfectly formed and beautifully stacked. I've never tried one, never considered treating myself to one of these delights - they always seemed too sophisticated, too chic for me! My opinion hasn't changed.

It was my own fault. As usual, I'd left things to the last minute and was on a tight schedule. I'd gathered all the ingredients (and 'aged' the egg whites for 3 days) and scribbled what I needed to do on a scrap of paper, but stupidly didn't allow time to read the comments and advice from, thinking "If I just follow the instructions, I'll be fine!". I knew exactly what I wanted to do - they were being baked for K to take in to the office tomorrow to share with his colleagues (he's another year older!), and I'd planned a chili-chocolate roulette. K really isn't into fancy flavours, and I wanted to do something a little more interesting than just chocolate (his request), so the idea was that I'd bake a box of cocoa macaroons filled with a chocolate ganache, one of which would be secretly laced with chili. And cross my fingers that K's boss wouldn't pick the wrong one. I'd bought a fancy black and red box to package them in, they were all going to be sooo impressed!

Pride comes before a fall. Everything appeared to be going smoothly, however the smug feeling started to fade as I was piping them onto the trays. I counted them... enough to make 14 filled macaroons (the recipe states that this can yield 5 dozen!), perhaps mine were a little on the large size? The next problem, the lowest setting on my oven is 100c (the recipe said that the first bake needed to be at 90c). Oh well, I'm sure it'll be fine. Next step, baking for 7 to 8 minutes, or 10, or 15, or 20... they just didn't want to cook! It was now quite obvious to me that they were not going to look anything like French Macaroons, I decided to treat them as a completely different type of treat (K has never even heard of them anyway, no-one need know). They were flat, sightly soft and chewy, but actually quite delicious! So I paired them up and sandwiched them together with the ganache I'd prepared. 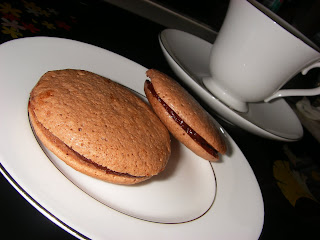 Now, if it weren't the end of the month I would have had another attempt at this recipe (or, as many of the other DB's did, try Tartlette's recipe out), but unfortunately I am out of funds until Friday, so I raided the cupboards to see what else I could throw together. Reluctant to trust my oven again, I decided to go with one of the recipes in the instruction manual - my oven has various functions (including steam) and recipes programmed in, and these seem to work most of the time. Apart from today. My choux pastry didn't puff up at all, no chance of squeezing any cream in those... So much for the tight schedule, ended up baking a batch of CocaCola cup cakes. So much for sophistication!