Saturday is soccer day. Both the boys train and play for the local junior club, which means that I get to spend hour upon hour on the side-line doing the dutiful mother thing. Which is a bit more involved than it was back home. Training is on Saturday afternoon from 2 til 5, usually running over by half an hour (and Sunday mornings, but we're at church). The athletics ground is brand spanking new, and is just on the other side of our little mountain. 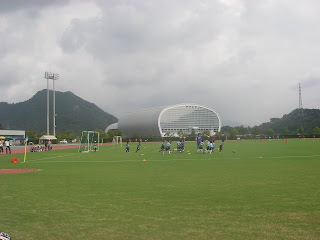 And I admit, the view makes the wait more pleasurable. But at least when it's just training, all we mums have to do is watch and look interested. Match days, well... the day of this home match, dads were asked to come early to prepared the ground for play, meeting at 7.00am! Mums needed to arrive by 8.00am, bearing 2 large blocks of ice (must be made in 1 litre milk cartons), 2 small towels, drinks, packed lunches (it was a tournament), balls and don't forget the kids! At 8.30 there was the briefing on how to use the kakigori-maker (ice-shaving machine, we had to man the stand whenever own own kids weren't playing, and the children could have as much as they liked), and then we were drilled on how to serve the kakigori (ice first, clear syrup next, then more ice, then fruit syrup, do not deviate from this) before kick-off at 9.00am. Of course, everything has to be done just so, no initiative-taking allowed. I got into trouble when, at half-time, I started to hand out the iced towels to the hot and sweaty players but... used the wrong box first. Shock horror. The two boxes were identical, one was for half-time, the other for when the final whistle blows. And as I was the only mother standing on the side-line watching (the others had all retreated to the shade as their UV-protective long sleeves, hats, scarves, gloves and SPF50 sun cream might not offer them quite enough cover) and found that the hoard of red-faced boys were heading straight for me, I opened the box nearest to me. Stupid foreigner. 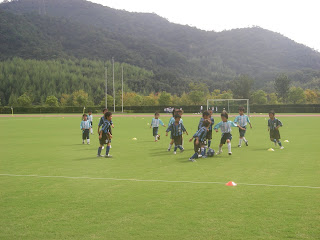 Hey ho, it's good for the boys and they enjoy it, so I guess I'd better learn the ropes in this new role. I noticed something today at practice that wouldn't happen at home - towards the end, the coach was stood on the pitch directing the youngest players with a cigarette in hand! So much for encourage heath and fitness.

Oh, and today is pretty Ayumi-chan's little boy's 2nd birthday - Happy Birthday Noah-kun! I made him a 'Totoro' cake (Totoro is a character from one of my favourite anime,

http://en.wikipedia.org/wiki/My_Neighbor_Totoro). It didn't quite go to plan, as the fondant icing I'd made was far too dry to do anything with, so quickly had to change to Plan B and work with butter cream. Of course, I couldn't do any modelling, so the finished cake isn't as fancy as I'd hoped (I wanted to include some makkuro kurousuke (dust bunnies?), acorns and leaves), but hey, the birthday boy is only 2 some I'm sure he won't be complaining. 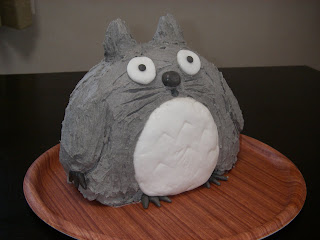 M took one look at the cake and then begged to watch the film after we'd spent a good while marching around the room singing "arukou, arukou"!
Posted by anchan at 22:01