Well, I had all sorts of treats planned for Christmas but unfortunately everything went pear-shaped when M caught pnuemonia and ended up in hospital on Christmas morning. 5 days later and a lot of the fresh ingredients sitting in my fridge were no longer looking their best, and my already-stretched budget for this month couldn't cope with starting again from scratch. Ah well, at least our baby is smiling again! It does mean that the gingerbread dough ended up in the bin and so that project will have to wait until next year, and that the mushroom extravaganza I had planned was foiled by MIL sticking them in a nabe. K's lobster was also relegated to the freezer, much to his disappointment (but believe me, that was the better option as his mother had offered to cook it for him!). So over the remainer of the New Year break I plan to make a few Christmassy treats, starting with the muffins that I was supposed to have thrown together on Christmas morning (instead of sitting in a hospital waiting room). I decided to make these for breakfast this morning and was disappointed to find that I only had enought flour to make up half a batch - just as well, considering as I was the only one eating them (M crawled under the chair hoovering up any crumbs):

Heat the oven to 250c. Combine the powder ingredients in a bowl, except for the 2 teaspoons of sugar. Squeeze the mikan into a measure and top up to 150ml with milk. Add the butter and egg and mix well. Pour into the dry ingredients and loosley combine, then fold in the cranberries. Spoon into muffin cases (this makes 12), then combine the remaining sugar and cinnamon and sprinle over the topps. Put them in the oven and reduce the temperature to 200c, baking for about 20 minutes. Best served warm and spread with unsalted butter, by the plateful! 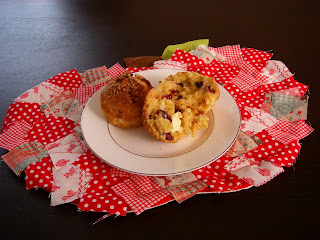 I'll probably make these again for breakfast tomorrow, to go with some freshly brewed coffee made with K's brand spanking new siphon coffee maker (a present his ever-thoughtful wife)! He fancies himself as a coffee gourmet (ha! he reuses coffee grounds!) and saw one of these being used during his beloved 'Kamen Rider' show, so will probably swan around wearing traditional jimbei in homage to Tendo Souji... 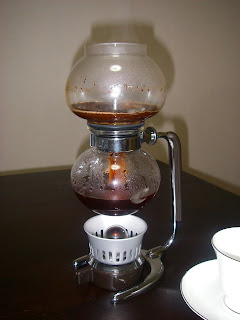 I've never seen one of these outside Japan, and so figured that it would be a great, fuctional souvenir to bring back to the UK one day. And as well as looking extremely cool, it really does make very good coffee. We had a play with it this evening, it took us about 15 minutes to make the first cup simply because K (being a man) refused to read the instructions properly. It will be much quicker tomorrow because I will make it myself.