I was feeling very smug. I thought I'd managed to find proper mixed dried fruit (complete with dried peel) and bought a kilo bag, salivating at the thought of mince pies and christmas pudding. I spent two whole evenings going through my cookbooks and magazines, waiting for the 'try me! recipes to cry out to me. And the I read the ingredients - raisins, sultanas, cranberries, papaya and pineapple! Not quite what I'd hoped for, but if I tweak the recipes here and there I'm sure I'll get away with it...

I started the day off today by making some mincemeat for the 'Mama & Me' cooking class next Wednesday. I'd seen mincemeat on sale in Kaldi, but at 680 yen a jar I thought I'd be better off making my own (although I may well cave in and treat myself to a jar - it is Robinsons! - before the week is out). My GHK magazine featured a fruity, suet-free, no-cook recipe using raspberries - yum! It only took a few minutes to make, and the flavours should infuse nicely over the next few days.

Put the dried fruit in a bowl with the orange zest and juice and leave to stand for 10 minutes. Stir in the rest of the ingredients. Done! 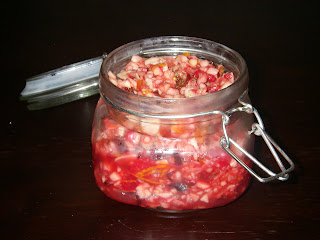 Later in the morning we headed off to do a bit of Christmas shopping, followed by lunch at the nearby shopping centre. Bought some lights to put outside (they were such a bargain and look fab!) as well as some baubles for the tree, and then went for some noodles. Kagawa is well known for 'udon' - thick, white noodles which can be served in a wide variety of ways. 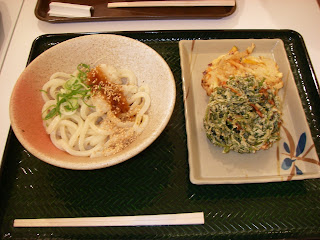 I chose hot shouyu udon, served without soup and topped with grated daikon raddish, finely sliced spring onions, and drizzled with soy sauce (105 yen/70p - I'm a cheap date). I love this and can rarely bring myself to try anything else. I add sesame and a pinch of fresh, grated ginger. I also chose a couple of pieces of tempura (kaki age, which is a mix of grated vegetables such as pumpkin, sweet potato, carrot and onion).

When we got home I was determined that we would get the tree up, otherwise we might just miss Christmas. So out came the CD of carols and, hurrah, we now have a festive corner in the house! We've been getting lots of parcels from home, so they now have a home at the foot of the tree (which is even bearing proper Cadbury's chocolate decorations, thanks to my dear friend back home in the UK!). We've had to put it up in the tatami room so that M doesn't get hold of things - at least for this year she hasn't yet worked out how to open the sliding doors... Judging from the amount of mess she is able to create when left unsupervised with a single tissue, she'd have a field day in there.
Posted by anchan at 20:55