I was woken up at 6.15am by W laughing and playing in his bedroom, so I knew we were in for a busy day! He'd gone to bed feeling so poorly, but made a miraculous recovery in his sleep and is now completely back to normal - how do children do that? So we were out the door by 7.50am on our way to W's kindergarten for their annual show, which I have say was abslutely brilliant! It was quite a lengthy programme, and as it's only a small school all the children had big roles to play. W had done very well at keeping most of it as a surprise, and as parents weren't asked to make costumes or props, we barely had a clue as to what lay in store. The show kicked off with the 'orchestra' giving us a rendition of 'Ito maki maki' (Wind the bobbin up), complete with harmonies - most impressive. 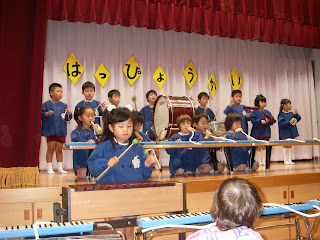 W is playing a harmonica, a small keyboard with a hose attached that you blow into to make a sound. Next he performed a Japanese dance, which was something to do with putting out fires - what ever it was, they all looked very, very serious 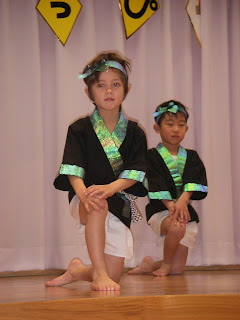 until they got to the part where they had to levitate... 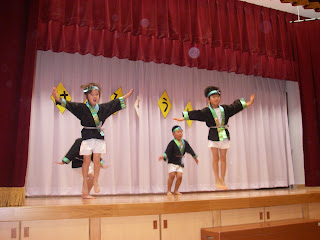 There was tons of singing and dancing, the teachers did skits and even parents and siblings got dragged onto the stage - great fun. My favourite part was the takoyaki power ranger scene, which was unbelieveably cute: 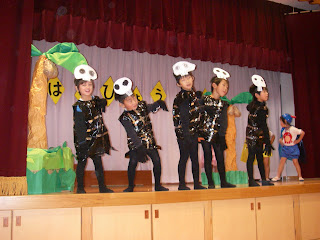 The staff must have worked really hard to make all the costumes and scenery, I hope they get a bonus for their eforts. And it's just as well W was better in time, as they announced at the end that they could all have the day off school on Monday - no last minute Christmas shopping for me then!

In the afternoon it was Kid's Club, and the children decorated the biscuits we'd made yesterday. What a mess! So glad that this event did not take place at our house. The boys made some beautiful stars but unfortunately, in the short time it took me to put M to bed, they ate them - before I could take a photo! But, hehe, I managed to sneak home a spare star for myself to decorate, so I'll make sure I take a photo before anyone finds it...

W has generously shared his germs with me and so I am now feeling pretty rotten. I really didn't feel like cooking, so we took the boys to McDonalds for dinner (their Happy Set of choice is Petit Pancakes with grape Fanta) and noodles for K and myself. M is now very adept at slurping up noodles japanese style - my camera died on me as I tried to capture a shot for you, but I know that she'll be only too pleased to do a repeat performance.