Lapsing already! I know, it's just like me. But actually, I've had the lurgy and then M (who's still got it - no sleep for the last 2 nights), and now it looks as though J is going down with it, too. Of course, K will have it over Christmas (I think he's already booked it)! As a result, this week's eating has been very basic, nothing much to write home about... until today when I was obliged to get baking again for a party this evening! Unfortunately, Cinders didn't get to go to the ball as she had to stay at home nursing poorly children.

I'd promised 2 sweets, so I had a good old nose through Nigella's books and plumped for her Snow-topped Spice Cake (How to be a Domestic Goddess) and the Chocolate Chestnut Cake (Feast): 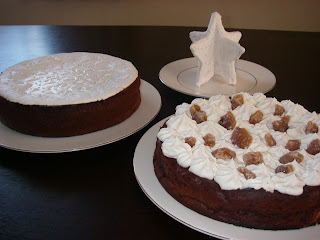 You can also see here that I decorated my 3D cookie, reluctantly helped by the boys - it's hard to let them 'help' when you want it to look pretty!

Whisk the yolks and oil together and add all the other ingredients apart from the egg whites and caster sugar. In another bowl, whisk the egg whites until they form soft peaks then gradually add the caster sugar. Fold this into the cake mixture, then pour into a tin. Nigella uses a Bundt tin, but I just used a 10 inch round. Bake at 180c for about 45 minutes until springy and shrinking from the edges. Allow to cool in the tin for 25 minutes before turning out.

The snow-topping is just royal icing (very festive), and I only iced the top minimize the cries of 'amai' (sweet!).

Melt the chocolate and leave to cool slightly. Whisk the egg whites with the salt until firm. In another bowl beat the butter and chestnut puree together, then beat in the rum. Fold in the chocolate, then the sugar. Stir in a dollop of the egg whites and beat well before gently folding in the remainder of the egg whites. Pour into a tin (again, I used the 10 inch round - Nigella used a beautiful fancy tin for hers) and bake at 180c for 40-50 minutes. Cool in the tin before turning out to decorate.

Whip the cream and pipe over the cake as you like, studding with pieces of marrons glaces.

Confession time. When I took this cake out of the oven I was feeling very smug and goddess-like, until I noticed the caster sugar still sitting on the counter! Too late to panic and start all over again, I decided that, as the chocolate wasn't particularly bitter, I could probably get away with this by sweetening the cream (which is how the japanese prefer it anyway). And it was absolutely fine, in fact it was more than fine, it was very, very gorgeous (and there's none left for tomorrow). Ah well, I could only get a huge can of chestnut puree, so I might just have to make it again... The Spice Cake was a hit, too. A great alternative to the traditional fruit cake, if you don't like the fruit (i.e. K). Would be good without the icing, or hot with a dollop of cream.