Oh dear, we have a poorly boy in the house. And I don't mean K playing up a cold, it's W and he's feeling quite miserable. He got sent home from kindergarten yesterday and woke up this morning in a very sorry state. He's trying his hardest to get better, as it's his happyoukai (show) tomorrow and he's been practicing for weeks. Mind you, I gave him some ibuprofen at 6am, and by the time the doctor saw him at 9am he was doing cartwheels around the waiting room (really, he was)! Perhaps if I do the same again tomorrow, he'll get through the performance... Anyway, it's not influenza, we're told. Phew, a cold I can cope with.

Late this morning, W and M were both taking a nap and so I got on with some baking for tomorrow's Kid's Club. They're going to be decorating 3D cookies - I have a feeling that this might be slightly more stressful than fun. I've baked batches of stars, and in theory they should look great. However, they are rather delicate, and I suspect that they could fall apart at the hands of over-excited children. I've made a fair few extra, just in case, and I know that any broken cookies will not go to waste! Whilst they were in the oven I decided to try to get to the bottom the comments mystery, and I've now managed to sort it so that any of you, not just other bloggers, can let me know what you think - hurrah! Please be reasonably kind.

On to dinner. I'd decided to treat K to shabu-shabu (a kind of hot pot cooked at the table), and he went off very happily yesterday evening to buy all that was needed. He saw the price of the meat. He decided that we would have vegetarian shabu-shabu! Hahaha, I couldn't believe my ears - it's the first time in 10 years of marriage that he has suggested a meat-free meal. And he enjoyed it! Whenever I hear the name 'shabu-shabu' I'm reminded of an advert for a sauce, where huge cows huddled round a pot swishing thinly sliced meat around in the stock - it always seemed a bit odd to me that cows would be excited about eating beef... Anyway, we had extra tofu and some of those eringi mushrooms again.

Cut the tofu and cabbage into bite-sized pieces and thickly slice the naganegi on the diagonal. Arrange the meat, tofu and vegetables on a plate. Mix the ingredients for the dipping sauce together and pour into small bowls, one for each person. Put the dashi in a pan, place on the table burner and bring to a simmer. Drop the various prepared foods into the stock for a few minutes (the meat will only require a quick swish!) and then dip in the sauce before eating. 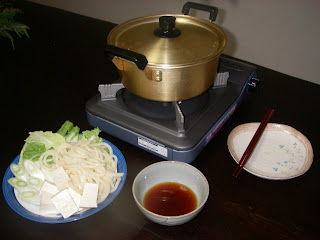 Yep, I forgot about the mushrooms until after I'd taken the photo!

It's getting cold now, so I'm going to go and jump in the bath to warm up whilst all is quiet. I'll let you know how we get on with the cookies tomorrow.
Posted by anchan at 19:01