It's not just me who's afraid of the bugs biting (bear in mind that this photo was taken on a hot 28c day): 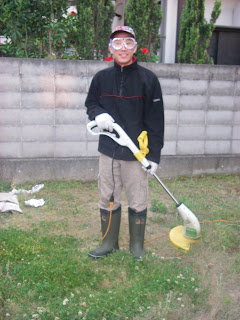 K doesn't do much in the garden. He does, when the weeds get to be knee height, wave the strimmer around, but that's about it. To his credit, when he decided that he wanted a vegetable patch he did dig over the area ready to plant. And look, as if by magic, a whole array of produce has appeared! 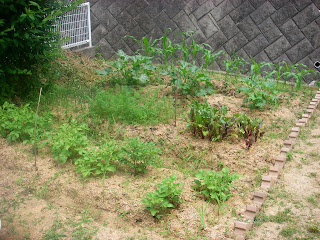 We'll be eating water melon, potatoes, beetroot, carrots, pickled onions, courgettes and sweetcorn before long (the rhubarb is going to take a little longer). That's if the weeds don't gain control first. Over this last week the mozzies have started biting and the spiders are getting bigger, so I'm somewhat less inclined to get out there and tackle them. I have noticed an awful lot of lizards (and I'm not scared of them, surprisingly), so hopefully they'll help to keep the creepy crawlies at bay. Oh yeah, and frogs too - don't see so many of them, but if there's so much as a drop of rain they start making a right racket, so I know they're there!
Posted by anchan at 21:13