Remember a while back I posted about cooking with kangaroo meat (http://creatingastir.blogspot.com/2009/08/faba-roo-ny-yeah-i-have-toddler.html)? I'd been sent some meat by www.roomeat.co.jp for me to have a play with and see how the folks liked it. It occurred to me that I'd prepared two different recipes but, what with all the excitement of the sudden trip to Australia, I forgot to tell you about the second. And isn't is just like me to forget where I found the recipe? I know it was on-line, I thought I'd bookmarked it... Anyway, I'd had to adapt the recipe as I wasn't using beef, and I started off want to make tataki however ended up simmering the meat in a marinade for a few minutes instead of the traditional method of searing the meat. I think I can pretty much remember the recipe. Not sure if this is really tataki, but it went down well with K and was unbelievably simple to make... 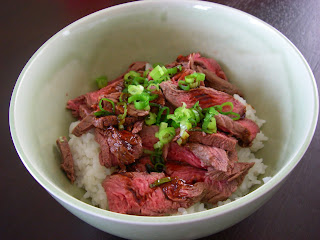 Mix together soy sauce, sake, mirin and dashi in a pan and bring to a boil. Add the meat and return to the boil. Cook 3 to 5 minutes (depends on the thickness of the meat, but be careful not to overcook the meat;it should be rare on the inside). Remove the meat, wrap it in foil and put it in the fridge overnight. Continue gently boiling the liquid in the pan until it has reduced to a thick sauce, being careful not to let it burn. Allow it to cool and keep in the fridge overnight with the meat. To serve, slice the meat thinly, arrange over hot rice, pour a little of the sauce over the top and garnish with some sliced spring onion.

Naturally, cooking with kangaroo has generated some interesting conversations. One friend said that she would probably enjoy eating it as long as she didn't know what she was eating (and remember, I didn't tell K the first time I fed it to him as I wanted to see if he found it tasty without any prejudice). That seems to be the main issue - kangaroos are cute! But it is far more ethical to eat the meat of an animal that requires culling than to raise 'ugly' animals battery-style for our dinner tables. Hey - cows are beautiful, just look at those big eyes! I do think that kangaroo meat would benefit from a new name (just as with beef or pork). There has been some attempt to re-brand the meat as australus, but it doesn't seem to be taking! Check out some of the other suggested names here:

hahaha, cyril! Don't be shy to have a look at what RooMeat have to offer (www.roomeat.co.jp - it's not all kangaroo!), the site is all in Japanese, but if you send them a note in English I'm pretty sure they'd be very happy to help you work it all out!
Posted by anchan at 12:50