The August 2010 Daring Bakers’ challenge was hosted by Elissa of 17 and Baking. For the first time, The Daring Bakers partnered with Sugar High Fridays for a co-event and Elissa was the gracious hostess of both. Using the theme of beurre noisette, or browned butter, Elissa chose to challenge Daring Bakers to make a pound cake to be used in either a Baked Alaska or in Ice Cream Petit Fours. The sources for Elissa’s challenge were Gourmet magazine and David Lebovitz’s “The Perfect Scoop”. 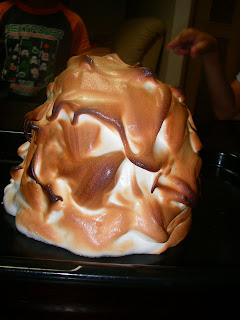 After last month's challenge, when the task for August was revealed I must admit to feeling, at first, slightly disappointed... ice-cream based, combined with cake... Don't get me wrong, I love ice-cream and I've been having immense fun experimenting with my own concoctions. I started to trawl the internet for inspiration, and suddenly my interest was ignited - literally - when I discovered that a Baked Alaska could be set on fire! It would make the perfect birthday cake for my MIL.

Big ideas and all that... the flaming bombe idea went out of the window after I read an article describing how a waitress had been killed as she served such a dessert in a fancy restaurant! I knew that K would never allow it, after all he won't even let me go ice-skating with the kids in case I break my leg. And it's not what you think - he's just concerned that if something were to happen, there would be no-one to cook, clean and look after the kids! No fun.

Having made a lemon meringue pie - the first one I've made in years - for Sunday lunch a month or so ago which was a hit with K (he's really not a pudding guy, which is probably one of the few things I would change about him!), flavour choice was easy. I did not want to be the only one eating this! 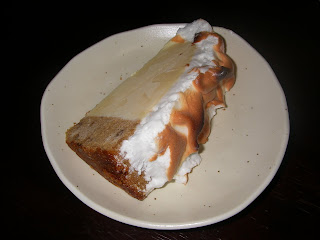 I chose a creamy lemon ice-cream recipe from Epicurious, rather than use the vanilla recipe provided. I poured the churned ice-cream into a clingfilm-lined basin and set to work on the browned butter. Oh my goodness, the browned butter - what a revelation! So simple to make, I resolved to always have a batch on hand in the fridge ready to go - I am smitten! Who would have thought that cooking butter would give it a caramel, nutty flavour? Wow. The resulting poundcake was so delicious, I couldn't bear to throw the trimmings in the bin and they got munched up over the course of the afternoon.

Everything went very smoothly, until I read the part where we were supposed to put the complete Baked Alaska in the freezer for an hour before baking. There is no way my freezer could contain my creation, I only have a draw at the bottom of my fridge... so it was going to have to go straight to oven, and I was worried. I slathered the cake and ice-cream with meringue as quickly as I could, not wanting to risk any thaw before it got pushed into the furnace, and in it went. 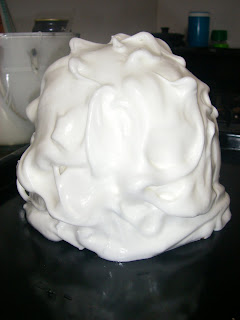 I eyed it nervously as it browned quickly, before proudly bringing it to the table much to the delight of MIL. Would it collapse into a molten mess as I stuck the knife in it? Erm, no. Amazingly, the ice-cream was still frozen solid, and took quite an amount of force to cut into. 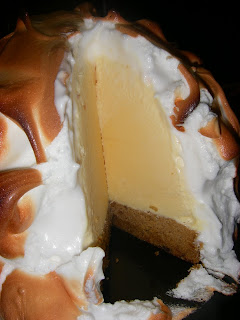 It tasted exactly as I had imagined it would - lemon and meringue are perfect together, and it was perfectly refreshing for such a hot (36c+) day. :-) 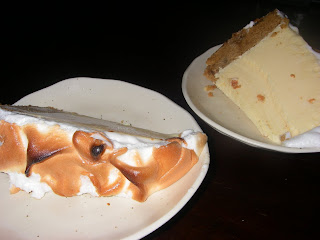 Elissa, thank you so much for introducing me to the delights of browned butter! The challenge was a fantastic choice, and I can't wait to make another, and another...

• The challenge does not require you to make both desserts. If you want to do both, you will need to make two brown butter pound cakes. The amount of ice cream you will need depends on how large you make your Baked Alaskas, but the recipe provided below makes one quart.
• While there is not a great deal of active time, this challenge cannot be easily completed in a day because of freezing time. Make the ice cream first, then the pound cake, then the glaze/meringue as stated in the assembly instructions.
• The pound cake calls for cake flour. You can make 1 cup of cake flour by placing 2 tablespoons of corn starch in a 1 cup measure, and filling to the top with all purpose flour.
• The ice cream can be flavored however you want by infusing the cream, stirring in extracts or mix ins, or folding in purees, sauces, etc.
• Instead of using a tea cup as a mold for the Baked Alaska, you can simply top the cake round with a scoop of ice cream and freeze until solid.
• For the petit fours, you are not required to use the chocolate glaze and can use your own recipe for fondant, poured fondant, royal icing, or marzipan. I recommend the chocolate glaze because it freezes well and balances the sweetness of the ice cream, but it does limit the scope of your decorations.

Mandatory: Whether you make the Baked Alaska, the petit fours, or both, you must make the brown butter pound cake as written and the ice cream from scratch.

Variations Allowed: Both desserts can be made in any size or shape, and the ice cream can be any flavor you can think of! For the Baked Alaska, you can flavor the meringue however you want. For the petit fours, you are not required to use the chocolate glaze, or you can add additional flavors. You can also brush the cake with a simple syrup if desired.

Ice cream – 45 min active time, ice cream rests/chills for 1 hour then overnight. Without an ice cream maker, the ice cream chills 2-3 hours and must be stirred every 30 minutes.

Assembly of Ice Cream Petit Fours – Ice cream must be frozen ahead of time several hours, then the cake and ice cream freeze overnight. After dipping, the petit fours freeze for one hours.

Assembly of Baked Alaska – Ice cream must be frozen head of time several hours, then the Baked Alaska is frozen 1 hour or up to one day.

2. Set up an ice bath by placing a 2-quart (2 litre) bowl inside a large bowl partially filled with water and ice. Put a strainer on top of the smaller bowl and pour in the cream.

3. In another bowl, lightly beat the egg yolks together. Reheat the milk in the medium saucepan until warmed, and then gradually pour ¼ cup warmed milk into the yolks, constantly whisking to keep the eggs from scrambling. Once the yolks are warmed, scrape the yolk and milk mixture back into the saucepan of warmed milk and cook over low heat. Stir constantly and scrape the bottom with a spatula until the mixture thickens into a custard which thinly coats the back of the spatula.

2. Place the butter in a 10” (25cm) skillet over medium heat. Brown the butter until the milk solids are a dark chocolate brown and the butter smells nutty. (Don’t take your eyes off the butter in case it burns.) Pour into a shallow bowl and chill in the freezer until just congealed, 15-30 minutes.

4. Beat the brown butter, light brown sugar, and granulated sugar in an electric mixer until light and fluffy, about 2 minutes. Beat in the eggs one at a time, mixing well, and then the vanilla extract.

5. Stir in the flour mixture at low speed until just combined.

6. Scrape the batter into the greased and floured 9”x9” (23cmx23cm) square pan. Smooth the top with a rubber spatula and rap the pan on the counter. Bake until golden brown on top and when a toothpick inserted into the center comes out clean, about 25 minutes.

7. Cool in the pan 10 minutes. Run a knife along the edge and invert right-side-up onto a cooling rack to cool completely.

Meringue (For the Baked Alaska)

Beat the egg whites, cream of tartar, and salt on high speed in an electric mixer until soft peaks form. Beat in the sugar gradually in a slow stream until stiff peaks form.

1. Line four 4” (10cm) diameter tea cups with plastic wrap, so that plastic wrap covers all the sides and hangs over the edge. Fill to the top with ice cream. Cover the top with the overhanging plastic wrap and freeze for several hours, or until solid.

2. Level the top of the brown butter pound cake with a serrated knife or with a cake leveler. Cut out four 4” (10cm) diameter circles from the cake. Discard the scraps or use for another purpose.

4. Unwrap the ice cream “cups” and invert on top of a cake round. Trim any extra cake if necessary.

5. Pipe the meringue over the ice cream and cake, or smooth it over with a spatula, so that none of the ice cream or cake is exposed. Freeze for one hour or up to a day.
6. Burn the tips of the meringue with a cooking blow torch. Or, bake the meringue-topped Baked Alaskas on a rimmed baking sheet in a 500°F/260°C oven for 5 minutes until lightly golden. Serve immediately.

Stir the heavy cream and light corn syrup in a small saucepan over medium heat until it comes to a boil. Remove from heat and add the dark chocolate. Let sit 30 seconds, then stir to completely melt the chocolate. Stir in the vanilla and let cool until tepid before glazing the petit fours.

1. Line a 9”x9” (23cmx23cm) pan with plastic wrap, so that no sides of the pan are exposed and so there is some extra plastic wrap hanging off the sides. Spread 1 ¾ to 2 cups (450ml to 500ml) ice cream into the pan. Cover with more plastic wrap and freeze several hours.

2. Once the brown butter pound cake has completely cooled, level the top with a cake leveler or a serrated knife. Then split the cake in half horizontally to form two thin layers.

3. Unwrap the frozen ice cream. Flip out onto one of the layers of cake and top with the second layer of cake. Wrap well in plastic wrap and return to the freezer overnight.

4. Make the chocolate glaze (see above.)