On Monday, a friend called by with a box of the most humongous dorayaki I have ever seen! For the uninitiated, a dorayaki is a type of sweet cake, made up of two pancake-like sponges which are sandwiched together with red bean paste. They are the snack of choice for the very-much loved, robot-cat-from-the-future superhero, Doraemon :-) 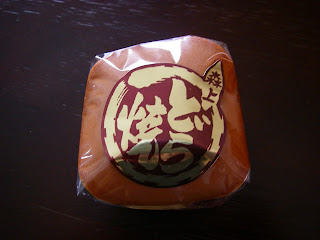 She had bought them fresh from a bakery (Morikami-ya in Kokubunji), and advised me to leave them for a day before eating. I had to beat the boys of with a stick to stop them getting at them, their eyes nearly popped out of their heads when they saw how big they were. Unfortunately, by the time they got home from school the next day, eagerly awaiting their treat, I was dealing with a very, very pukey baby and the dorayaki were almost forgotten... until this morning. I honestly would not have even considered eating these for breakfast had it not been for a friend posting me a link to Bill Cosby's chocolate cake sketch:

After seeing that, I felt entirely justified in serving this nutritionally balanced meal before school :-) 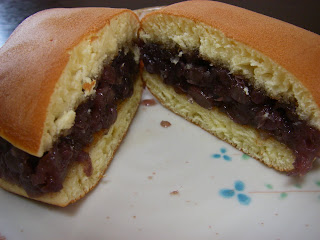 Check out the filling! 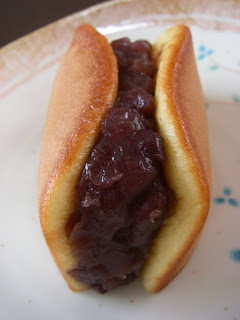