I don't want you to think I've gone quiet on you again, but things have been busy and blah, blah, blah... I spent ages over the weekend trying to set up my Etsy shop, finally managing to list my first item yesterday - woo hoo! There's still a lot of tweaking to do on the site, but I'd been putting it off for weeks so was determined to get it up and running (I'm so impatient).

Just so that you know that I've been at least thinking of writing, here's a couple of very quick recipes for you :-)

OK, so the first isn't really a recipe... more like an idea that I wished I'd have thought of sooner! Not sure what to call it... Chocobanana Mush? Anyway, take an unpeeled banana and wrap the whole thing in cling film. Microwave for about 2 minutes, depending of the size, then spit the skin open and sprinkle with a little cocoa or even drinking chocolate. Voila! 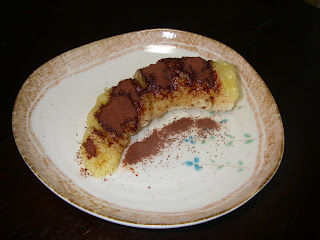 I made this for the children, so took them out for the skins for serving. I can't normally get the boys to eat bananas, but these disappeared as soon as they arrived at the table :-)

Next up are some kabocha dango (Japanese pumpkin dumplings). I had a friend coming to visit this morning and wanted to make some kind of snack, but I know that she has a lot of allergies and so needed to play things safe with the ingredients. These were a doddle to make, really quick, and looked very pretty. 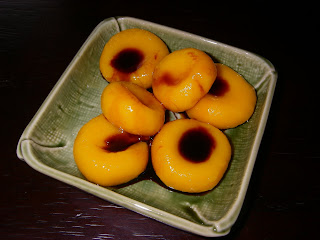 Put the kabocha in a bowl, cover and microwave for about 4 minutes, until soft. While still hot, mash with a fork and allow to cool a little. Gradually mix in the rice flour, then carefully add the water until it forms a fairly soft dough. Bring a pan of water to the boil. Roll teaspoons of the dough into balls and gently squeeze with your thumb and finger to flatten and make a dent in the middle. Drop into the boiling water and cook for about 15 seconds, the remove them and place in a bowl of iced water to cool. Serve the dango drizzled with kuromitsu.
Posted by anchan at 14:12