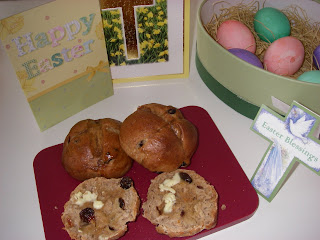 I've been pinching tips from various recipes and here's the version I came up with. I decided to cut the crosses into the top rather than pipe a paste, as last year they just got picked off. They don't look quite as good this way, but it's less fiddling around.

Sift the flour, spices and salt into a bowl and stir in the yeast, fruit, zest and sugar. Melt the butter in a saucepan, then add the milk and vanilla and warm until tepid. Whisk in the egg, then add to the flour bowl and mix to a loose dough. Knead for 10 minutes (add extra flour as necessary) until the dough is springy. Divide into 12 pieces, shape into balls and arrange on a baking tray. Cover with a damp tea towel and leave in a warm place for 90 minutes, until double in size. With a sharp knife, cut a cross in the top of each bun. Bake at 180c for 10 minutes, then reduce the temperature to 150c and bake for a further 15 minutes. Whilst they are in the oven, mix together the brown sugar, milk and marmalade to make the glaze. As soon as the buns come out of the oven, brush them with the glaze then leave to cool enough so that you don't burn your tongue as you wolf then down, smothered with butter!

I'll make some more for Sunday, but K doesn't like raisins so I'm going to try NQN's cinnamon chocolate version:

Enjoyed a second brisk walk to school this afternoon. I wonder if I'll still be this enthusiastic by the end of next week? Got to make the most of this weather (and the fact that the mozzies aren't biting yet). Here's some of the en-route scenery: 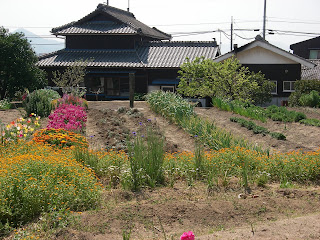 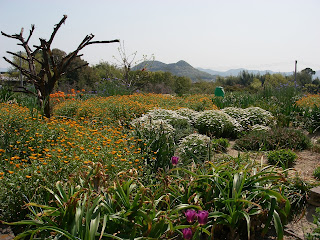