I'm never going to win any awards for feeding my children the healthiest of diets. I do my best, and now that we've managed to wean W off just rice with sprinkles and on to pretty much anything I put in front of him (yes it's true - here's the proof!: 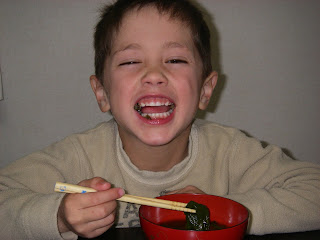 spinach is officially his favourite vegetable!) life has certainly got a lot easier. But every now and then I find that the fridge isn't as stocked as I'd thought, and so rather than face shopping with all 3 children in tow, that's the time to reach right into the back of the fridge to see what needs using up. Yesterday was one of those days. I discovered some double cream, egg yolks, bread and some sultanas. Hee hee, bread and butter pudding for lunch!

4 slices of white bread, buttered and crusts removed
250ml cream
250ml milk
3 eggs (I added a couple of extra egg yolks just because they were going to end up being thrown away otherwise)
50g caster sugar
75g sultanas (or a mixture of sultanas and raisins)
vanilla extract

Slowly boil the milk and cream together with the vanilla, then remove from the heat. Cut each slice of bread into 4 triangles and arrange in a buttered dish with the sultanas between the slices. Whisk the egg with the sugar, then gradually mix in the milk and cream. Pour over the bread, then bake at 160c for 45-50 minutes.

I'd never made this for the boys before and, my goodness, it went down well! I've just tried to upload the photo and realised that the memory card wasn't in the camera when I took it - can't work out how to transfer the photo from the built in memory, so apologies but I can tell you it looked very tasty!

Very happy boys this evening. A colleague of K gave them each desks that had belonged to his now grown up children, and they were delivered this afternoon. J and W spent an hour or so cleaning and polishing, before adding the finishing touch of... Pokemon stickers! K and I were also very pleased as it saved us a packet - it costs a small fortune when they enter elementary school here. 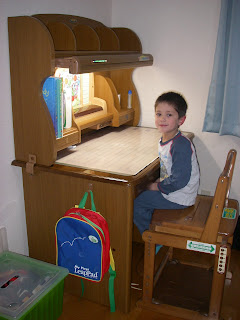 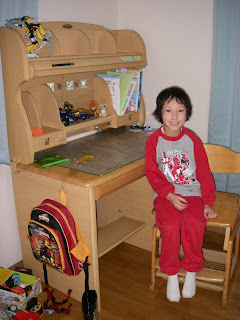 Ahh, now if I can only get them to have all of their 'creative moments' upstairs...
Posted by anchan at 19:51