Once again, after a rather noisey weekend, peace has descended and so I have a little time to write.

Yesterday we went to meet the lastest addition to the F clan for the very first time! He arrived on Monday and both he and Mum are very well although, this being Japan, they are still in the hospital. We arrived to find S in her (very, very nice) private room, but where was the baby? In the baby room, naturally. She took us for a viewing through the sound-proof window (visitors are not allowed to hold the babies until they are released from hospital): 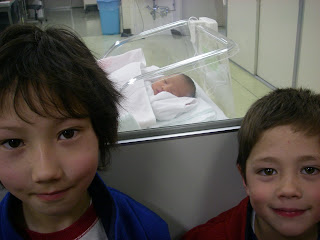 He looked so tiny and adorable, snoozing away but squirming all the while. There were only two babies in the room, the other was a teeny weeny premie who was crying his little heart out. A nurse sat at a desk in the same room, but she never went to check on him or give him a cuddle. Actually, I was quite shocked by the set-up. There is no rooming-in. The babies are on a 4 hour schedule and the mums are summoned to feed them at fixed times. In between feed times, the babies stay in their bassinets in the baby room, while the mums rest or do their own thing. If the babies cry, they are just left to scream it out. Seems very harsh for little newborns. I don't get why the mums don't seem to want to be with their babies. When we asked how S was feeling, she sighed and said that she wasn't getting much sleep as the nurses come and wake her up for feeds round the clock - my heart bleeds!!

On the food front, Saturday was nice and easy as K had picked up some bargain sushi for his dinner: 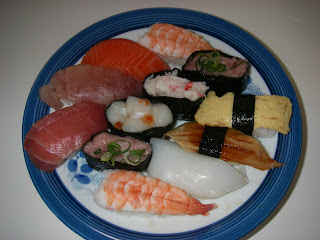 All this for just 380 yen (just over £2)! For the children and myself, I made a simple bake with gnocchi, which was sooo nice I could have eaten the whole lot on my own, given half the chance: 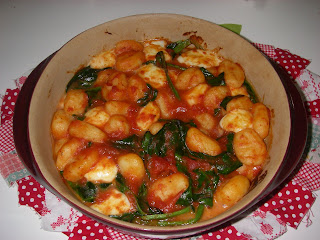 Gnocchi bake with spinach and mozzerella

Cook the gnocchi and heat the pasta sauce, stirring in the spinach. Combine all the ingredients in a dish and bake at 190c for about 15 minutes. Mmmmmmmmm.
Posted by anchan at 11:55