We had a great afternoon on Saturday. We took the children to Mannou Koen (Park) for the 'Ice Festival'. Mannou Koen is a beautiful place set on the side of a mountain. It's huge, with nature and play areas, and the most amazing views... There's a big, wide open space with mounds just like Telly Tubby Land and enormous inflatable balls to play with, and a gigantic white 'cloud' to bounce on! Unfortunately I realised as we were half way there that I'd left the camera on the dining table, but K took some snaps using his phone and it could take a while for him to work out how to transfer them to the computer. We're going back there in April anyway, so there'll be more photo opportunities then.

The Ice Festival wasn't up to much. It was a lovely sunny day, the park was all bright and green, very Spring-like in fact... but there was a slide made of ice for the kid to toboggan down, with the obligatory festival food stall next to it selling takoyaki and chips. That was it! The boys enjoyed it, though, and once they'd been down the ice-slide we headed for the main play area. This is where I did myself an injury. The boys persuaded me to join them on the slides (which were huge, 65m long winding down a hill) and we had great fun trying to work out how to go faster. I should explain that slides here aren't like the slides back home, they are made up of hundreds of rollers. And I did wonder why the adults were nearly all descending in a squatting position (on their feet), but I assumed it was just to go faster. I found out, when I climbed into the bath in the evening, that it is actually to protect their derrieres! At the time I was unaware that my coccyx was taking such a bashing, but now I can barely sit! I got friction burns!! Nice of someone to warn me... Trying to keep upbeat about it all, at least this is perhaps an indication that there is less padding in that area than there was a few months ago!

On the way home we stopped at an okonomiyaki shop for dinner. I LOVE okonomiyaki (a kind of thick pancake made with chopped cabbage and other bits and bobs), but as I didn't have my camera with me, I'll just have to go there again. J reluctantly agreed to try what was on offer and hasn't stopped talking about it since! Instead, I'll tell you about the dinner we had the night before - avocado donburi served with edamame and miso soup. 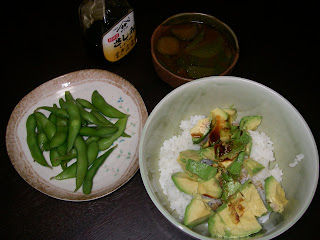 The donburi is simply rice topped with diced avocado and drizzled with soy sauce and a bit of wasabi. I used to make this for K quite often in the UK, as it's supposed to taste very similar to raw tuna, which we weren't able to get easily. The avocado were really cheap - 2 for 100 yen (about 70p)! I prepared a big bowl of edamame (soya beans boiled, in their pods, in salty water) for all three boys to fight over, they can't get enough of them!
Posted by anchan at 11:56